UNCOVERING THE IDENTITY OF MY DONOR : PART 2

HomeBlogUNCOVERING THE IDENTITY OF MY DONOR : PART 2

In late September 2017, I was baptized as an unwitting new member into the community of the donor conceived. It’s an intense, tightly-knit one, though it would be months before I’d know that for myself.

In the early days, I had enough to handle with unpacking the sudden dysphoria in my own head. There was little space to dive into intimate, fully-formed groups where others like me shared, commiserated and navigated the experience together.

And yet, I had unintentionally invited in a small community of close friends in the early stages. I told a few of them about everything I was navigating with Morgan on her quest to find her biological roots. How could I not? It’s a conversation starter. And Morgan’s biological connection to me was undoubtedly a real one — the DNA tallies substantiated it.

At the time, I was simply a medium for her to uncover her truth; one more person to help close a foundational chapter in her life, and answer those simple-but-profound questions of identity. The ones so many of us are so assured of that we never imagine questioning them.

By early-September, both Morgan and I were confident that one of my my mom’s brothers — one of my uncles — was Morgan’s biological father.

Not because we’d known they’d donated sperm. But because in a sampling of plausible explanations, it was the only one that was plausible.

I was like a detached, third-party detective/sleuth for Morgan. She was looking for family; she had questions of origin as the child of a sperm donor.

Then, suddenly, this colossal question of hers was also mine.

One night, Morgan was donor conceived, and I was an observer. The next, I was as critical a missing piece to Morgan’s story as she was to mine, the painter placing a brush in my hand to form a shared pièce de résistance.

Imagine my surprise — and the surprise of the friends I’d brought along for the ride — when I explained that none of my uncles were Morgan’s biological father. But the real truth was far more dramatic and compelling for me personally.

Which, in short order, led to the question: If Morgan is your sister, then —

Who is your biological father?

What a dramatic shift two-and-a-half weeks can make.

It’s October 5, 2017. After touching down in Washington D.C. with Morgan, we’ve found ourselves seated at Thomas’s kitchen table. We’re probing into one another’s back stories, striking intimate chords that are rarely reached with close friends, let alone total strangers. But that’s hardly an adequate assessment of who we are.

We’re blood siblings anchored by a connection to a common link that is uncommon to the world.

Among the three of us, I’m the only one who grew up not knowing I was donor conceived. So, while we are all new at this sibling-ship, I am in fact the proverbial dawdling-horse in the race. Both Morgan and Thomas have already faced some of the questions of identity I’m facing now, and I’m playing catch-up.

But they’re both well-adjusted, and objective success stories in life. They’ve always known about this question mark in their lives and haven’t been hamstrung by it as individuals.

Together, though, that question is palpable, because the only reason we’re here is because of this question mark. 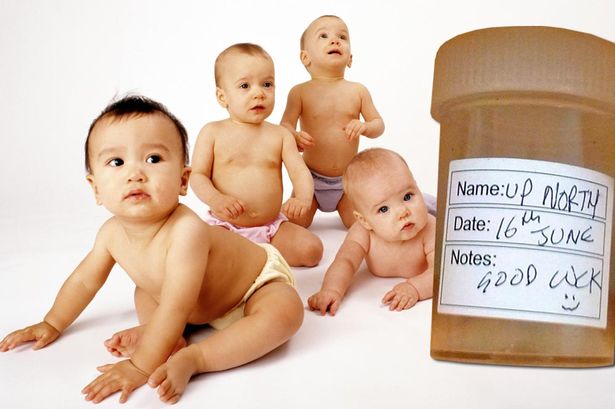 It turns out, having always known they were donor conceived, they know quite a bit more about this blue-eyed mystery man than I do.

Morgan says her mom hadn’t been shy about sharing details of her origins, to the extent she knew, which she recounted to me and Thomas. Her mother had gone to a couple of fertility specialists, and ultimately landed with one who’d developed a growing reputation for success with inseminations and successful births via donor sperm.

“She was told that the donors were all resident physicians at the University of Rochester in the early-80s,” she explained. This jibes with the brief anecdotes I’ve heard from my mother and father in the past days.

Thomas nods, offering agreement that he’d heard the same thing from his own mother. “When the doctor asked her what features she might like in a donor, my mom had remarked that she wanted him to look like Tom Selleck.”

Of course, it’s only funny because the tall, dark, hairy 80s heart-throb looks nothing like Thomas, or me for that matter.

Thomas’ mom loves her son the way adoring mothers do. But even she could acknowledge that she didn’t get her wish, even if it was an arbitrary, inconsequential one.

I have no idea what my parents asked for, but Morgan’s mom had in fact made some requests of her own. A self-proclaimed ‘mutt,’ Morgan and her family were ‘a little of this, a little of that.’ Morgan’s mother had said as much to the fertility doctor. As a result, she was hopeful for someone with a mixed-European background that was similar to the family. She did, however, call out that there was no Jewish ancestry in the family lineage.

Seated at Thomas’ table, though, it was abundantly clear — with each of us having 50 percent Jewish heritage — that not only was our donor Jewish, but expertly so, having 100 percent Jewish origins in order for that math to work. (And no Tom Selleck lookalikes).

In fact, Morgan’s mother made only one other request — that it be a one-time donor.

How wrong that turned out to be.