October 5, 2017: I’ve just walked through security at Rochester International Airport, thankful for the expeditious mercies of TSA Pre-Check on a morning that began at 3:45 a.m.

I approach the monitors that list all departing gates and quickly find mine, then take a deep breath. Rochester to DCA airport in Washington D.C. via JetBlue — terminal A, gate 5. I’m gripping the handle of my luggage with my right hand and adjusting the fabric at the base of my long-sleeved t-shirt with my left.

I’ve had few nerves about this morning, though they’re crashing in like a wave all at once as I begin to walk to the right, toward terminal A.

I’m about to meet Morgan in-person for the first time.

A few days after we discovered that we were half-siblings we’d agreed to meet at the airport this morning so that we could fly to Washington D.C. to meet Thomas. He works in local government there, and as fate would have it, I’d already had plans to be in D.C. to officiate a friend’s wedding before we’d discovered Thomas at all.

“I’m not sure if this is weird or not,” I’d texted him, “but…would you be interested in meeting, grabbing a drink while I’m there?”

We told Morgan we’d be getting together and — rightfully — she’d asked if she could join. Nothing had happened that compelled us not to invite her other than the fact that my trip to D.C. had been planned for months — though in my penchant for taking things down-to-the-wire, I hadn’t actually booked the flight yet.

“If you really want to go,” I’d said to her, “I can actually come up to Rochester first. I haven’t seen my parents since all of this happened, and I could fly to D.C. with you out of Rochester.”

“You’d do that?” she asked, surprised.

“Absolutely!” And I’d meant it.

I’ve just passed a small coffee shop on my left, having completed a turn where I now have a
clear sight path down terminal A. Morgan texted me 10 minutes ago. “I’m here. Ahh!”

If you’ve never experienced something like this — and I’d venture to say that might be the case — let me attempt to walk you through it.

The feeling that I have right now has mythical qualities. And it’s weird. I’m excited to meet this stranger/blood relative, sure.

But I’m equally overwhelmed by a self-imposed expectation to digest its weirdness and match her excitement — judging from our phone calls and texts, there’s a lot of it. Morgan is an enthusiast. Not for any one subject, perhaps, but just in her spirit and energy.

What if I disappoint her? How am I supposed to act?

I am no more than 100 feet into my stride into the terminal straightaway and I notice her. The face is familiar from her pictures. She’s glowing with a full-faced smile at the sight of me and I can’t help but match it.

I can’t believe this is real, but this is happening to me.

She’s walking toward me now, and I’ve seen enough dramatic reunion scenes in movies to know that the orchestra should start playing right about now, or that we should at least run up to each other and embrace with all our might.

My heart thumps. I fidget with my hands.

She’s about 50 feet away from me now, and her face is coming into focus. I’m moving faster
now, not sure what to do with my facial expressions. She has a wisp of blue hair that’s flipped up and around her forehead and I can’t help but feel like I’m closing in on a mirror of myself.

10 feet. This is happening.

We make eye contact. Our arms open. We crash into a hug.

It’s the kind of hug that transcends. Nearly seven months ago, I messaged her — an imagined, quasi-Nordic stranger — with few believable clues as to who she might be. Never mind the idea that she could become the only person in the world who’d come to understand an experience I may never fully explain.

This is the embrace that sets roots to scattered seeds.

It’s a 10 second hug. As we pull away, I can see tears at the edge of her eyes, and she says
something that must sound bizarre to any onlookers — including the woman Morgan had
asked just minutes prior to take pictures of this whole thing: “Oh my God, I want to touch your face!”

And all of a sudden, we’re there, in front of each other. Off of the Internet and into real life. My half-sister. As her facial features come into focus, I see all of our similarities. She pulls me into a bear hug and holds me, but draws back to reveal tears streaming down her cheeks. Her first instinct is to cup my face in both of her hands.

Our general facial structure, the rounded, oval-shaped face. Our lips, the shape of our eyes and also the color. As she studies me, I study her, with equal parts curiosity and thrill. This is a face I have always known. This is my face too.

I’ve had a sister my whole life, and cousins too. I’ve accepted long ago who’s who in my life, including the fact that the people who really look like me are limited to my sister.

This is as bizarre as it is shocking. I always wondered what it would be like to have another sibling — never so bold as to think I’d have one, let alone two — and now I’m face to face with a woman who shares my eye color, my smile and all of the other curves that make a face. 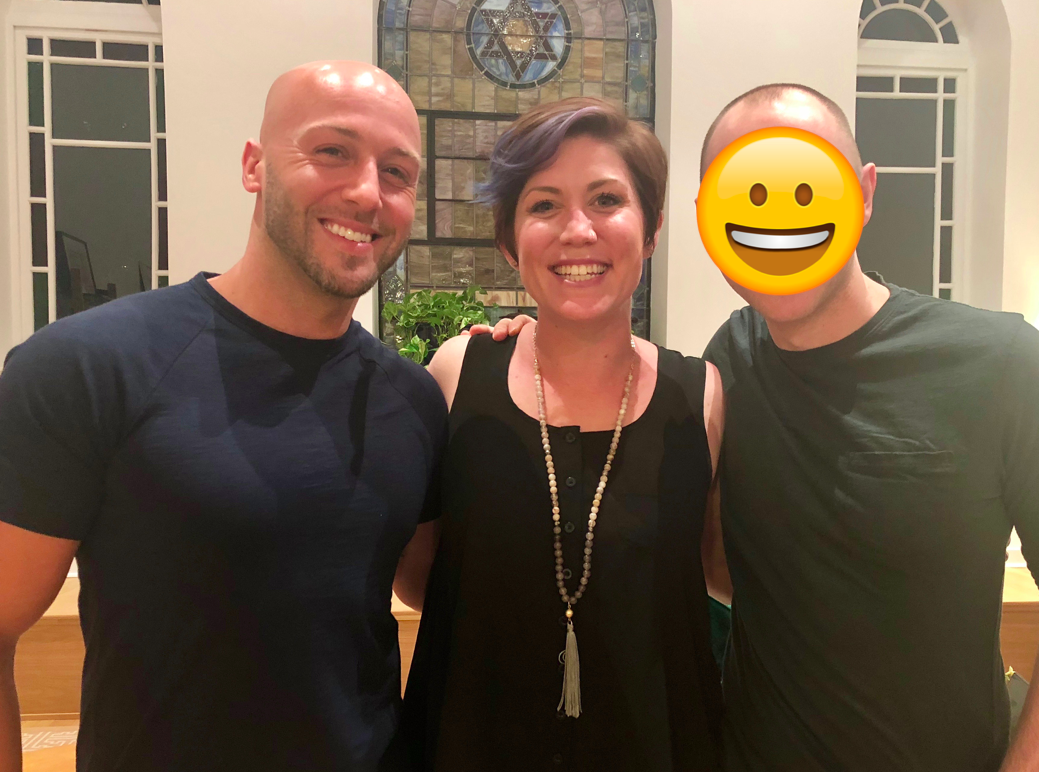 An Uber meets us just outside of Reagan International Airport. Our destination? Thomas’s condo. The weather is all you’d hope for on an October morning in D.C.; sunny, low 70s. The 25-minute ride starts as if it’s come with a countdown clock, ticking down with anticipation. We drive past monuments and a particularly exciting edifice for me as a big Harry Truman fan — the Harry S. Truman Federal Building, home of the U.S. State Department.

Finally, we arrive on the street corner nearest his condo. We step out with our luggage, scanning to find the address on the buildings near us. A Milk Bar is on the corner, baiting me to step in and grab some cookies for our visit.

And then, just down the block, we catch a glimpse of a guy sitting on a stoop; he looks from a distance to be the guy we’d seen from pictures on Facebook. Morgan and I glance at each other. Thomas?

As we enter his periphery, he makes the same connection we have, and stands up. He’s wearing a short-sleeved navy-blue t-shirt with faded, navy green pants and brown leather lace-up sneakers.

You only get one chance to make a first assessment, and my first reaction is much like the one I’d had with Morgan just hours before. He stands, smiling toward us, and I take it all in — his eyes, blue like mine, the crow’s feet, advanced for his age, like mine, the shape of his frame, like mine.

His smile overtakes his face — the way mine does — and I am disarmed.

Morgan and I had connected months prior and, through conversation, knew that we both
wanted to see this through. But Thomas, as a part of our equation, is a discovery that’s less than two weeks old. At first, we weren’t sure about his level of interest in any or all of this. And how could we know? Maybe he’s half-way in, and we’re all the way in. Or maybe we’d struck gold with our late addition.

Thomas opens his arms as a first instinct, not as a reaction to one of us initiating a hug and him guiltily reciprocating. That feels warm to me, largely because he’s perhaps taken the biggest risk among the three of us by inviting us to his home, having only known we’ve existed since the last time the Lions had a home game.

“Hey!” he says, greeting us with the word being drawn out. Enthusiasm. The same way I’d say it.

Hugs exchanged, we all stand there for an instant, each wondering: what now? 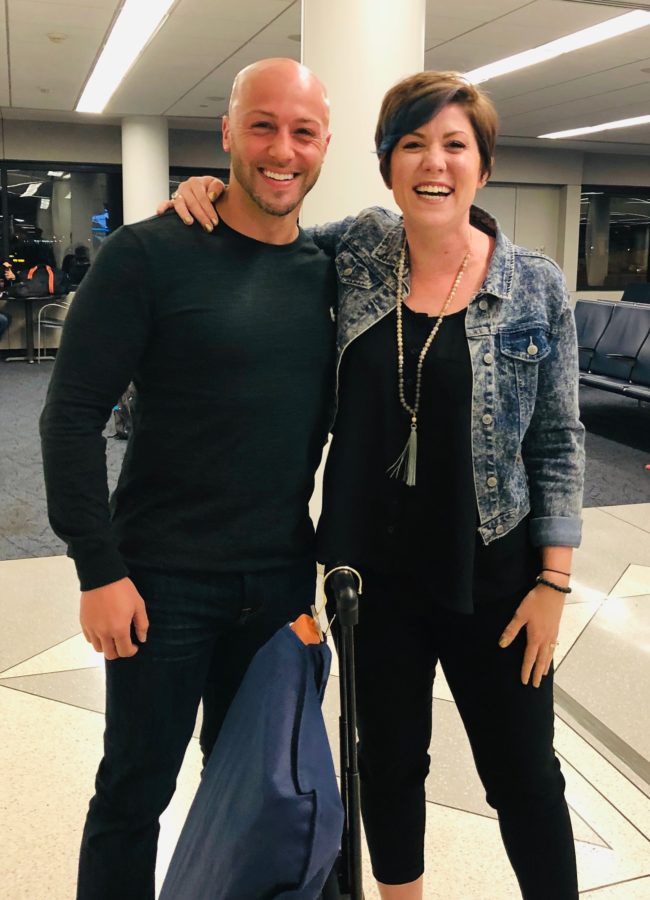 I grew up a boy in search of validation. A word of encouragement. A reminder that I’m loved. They were as essential to me as food and water. Maybe that’s commonplace for kids and teens; they’re a curious blend of naive arrogance and staggering insecurity, a hormonal firefight manifested inside a frame adorned in pimply skin.

Graciously, my post-college years and adulthood have rendered those insecurities moot. My self-doubts are at least rooted in logic these days. But not today. I desperately want their approval, here at the breakfast table as we fork over eggs and hash browns. We each share the DNA of the same person, the same donor. Maybe that’s why I’m fearful. Maybe rejection from a total stranger can be written off or rationalized; they don’t know me, they don’t understand me. They aren’t like me.

But with Morgan and Thomas, it’s different — they are me. I am them. Each of us is a living, breathing choose-your-own-adventure book, fulfilling alternate realities from the same, twisting helixes of DNA. If I’m not accepted, it’s not for a mismatch of interests — it’s a rejection of me. A lesser version of them.

Of course, I don’t say this out loud. I try to bury the thoughts entirely. And yet, it’s the conversation that takes hold.

It begs the ultimate question to ask three strangers who discover later in life that they’re half-siblings. And to an extent, we’re real-life case studies on the debate. We are here together, in the flesh, because of nature. DNA. Substantial matches across a spectrum of 23 chromosomes. But just the same, we are also here — emotionally mature enough, self-starters, eager to have this conversation — because of the parents who raised us.

If I embrace my nature, I am a threat to that which has nurtured me. But if I deny this exploration into nature for the sake of ‘nurture,’ then aren’t I ultimately quieting, dousing that which is quintessentially me?

There’s Morgan, a mother of two who cares for her two kids, teaches part time and paints — masterfully — in her free time. An artist with a master’s degree in those studies. She connects in the same way I do, through full immersion between humans with her heart on her sleeve.

Thomas is perhaps the most toned down of the three of us. If Morgan is high energy and I’m a slightly scaled back version of her, then Thomas is a scaled back version of me. He’s engaging and present, but he’s reserved to a degree. Careful maybe. But he’s warm. In terms of achievement, well, he’s got a business degree from Penn, and a public policy master’s from the University of Chicago. And he has political ambitions.

And then there’s me. Objective self-assessments are failed ventures on their face, but if pressed, I’d say I’m somewhere between the two of them, even as the oldest. I have some of the creative qualities, through my writing, that Morgan possesses, and I have some of the studious, bigger professional ambitions that Thomas does.

Nature? Three master’s degrees among us. Yeah, that sounds like nature.

But chemistry. A seamless integration of those qualities, flowing through in balanced measures among the three of us. Strangers on a common plane, with a measured, egalitarian respect mixed with the comfort and care of hearts that mean it.

Maybe what we really have is the best of both worlds.