AND NOW THERE ARE 7

I’d love to think of myself as a fortune teller in the DNA ancestry test world, because I could make some nice side money by accurately predicting the future. In my last post, I wrote with regard to the discovery of new siblings “…[you know] with a high degree of certainty that within six to eight weeks of holiday gifting, you’ll probably find one or two more.”

Well, right on cue, the notification comes. It’s a Thursday. February 6. I am on the floor of my new house, assembling furniture when the phone rings. I can’t quickly get up to see it, so I let it ring. There’s an Ikea Allen wrench in my hand and I’ve got three shelves to go. The phone stops ringing. Then there’s the ding of a text message.

In my world, the sequence of one after the other typically means something urgent is on that screen.

Just then, the doorbell rings. These are the early days of mayhem associated with not only moving into a new house, but remodeling it at the same time.

I rise off the floor, setting aside my Allen wrench, to grab the front door. It’s our flooring contractor. Minutes later, a painting contractor. I finally get the chance to look down at my text message, perhaps 30 minutes later. The message on my phone is from my brother CJ. 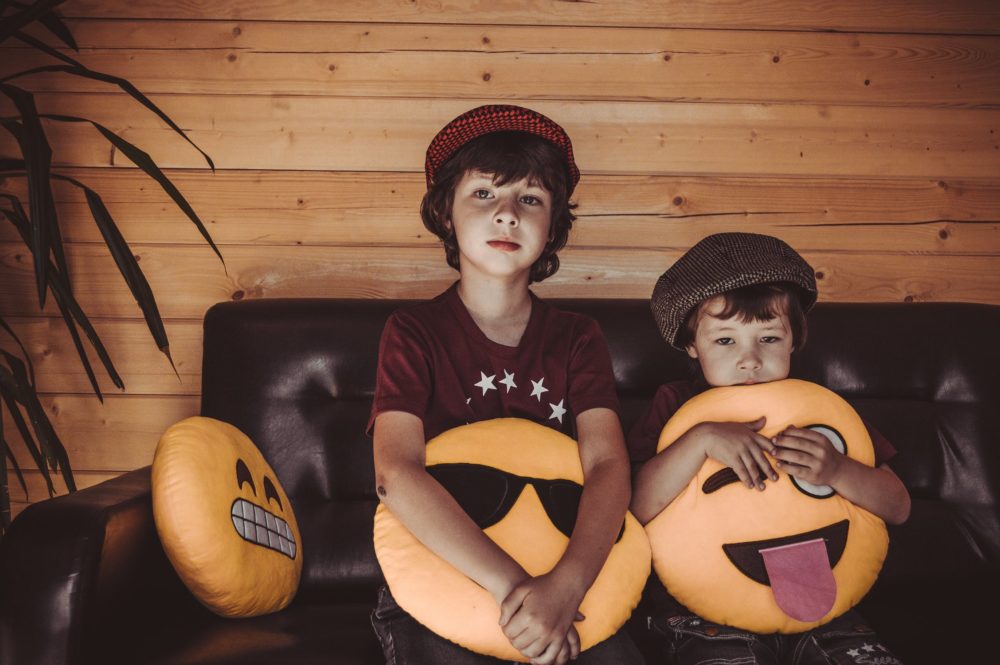 CJ and I have grown closer in recent months. Communication is smooth and regular between us. So I sense that his words aren’t a general request, but a tactful way to say what he really means to say — call me now.

I swipe open the screen again to reveal my call log, and click on his name to buzz him back.

“Hey man!” he says, enthusiastically. We spend a good minute with the formalities of catching up on life over the past weeks, but I can practically smell his eagerness to share something else. Something big.

“So…” He drops it into the conversation, meaning for it to be a hard transition. And boy is it ever.

“There’s another one,” he says. “We have another brother. Now he’s the oldest.”

I confess that using the word ‘shock’ with regard to my life over the past two years has felt both inadequate and insincere. Once you learn at the age of 33 that you and your dad don’t share blood, or when you wake up one morning to twin sisters, everything else underwhelms.

But that’s the point — this continues to happen. It will continue to happen. And whether or not I want it to be about me, it will be — even if my share of this ‘pie of people’ gets smaller each time. I am an unwitting co-conspirator in world-shaking news for blood strangers. Those who haven’t a clue that they have six (probably more) siblings they never knew existed, along with other family secrets they’d never dreamed of.

The latest addition to the group, ironically, is in fact the first among us.

“He said he’d love to chat with you if you’re open to it,” CJ says. “I can give him your number.”

My newest (or oldest?) brother texts me about an hour later. His name is Dallas. Like the other six of us, he was conceived and born in Rochester, NY, but as the first, he was born in 1982. (To be explored at a later date is the fact that there’s now a full three-and-a-half years between the oldest and youngest of us). 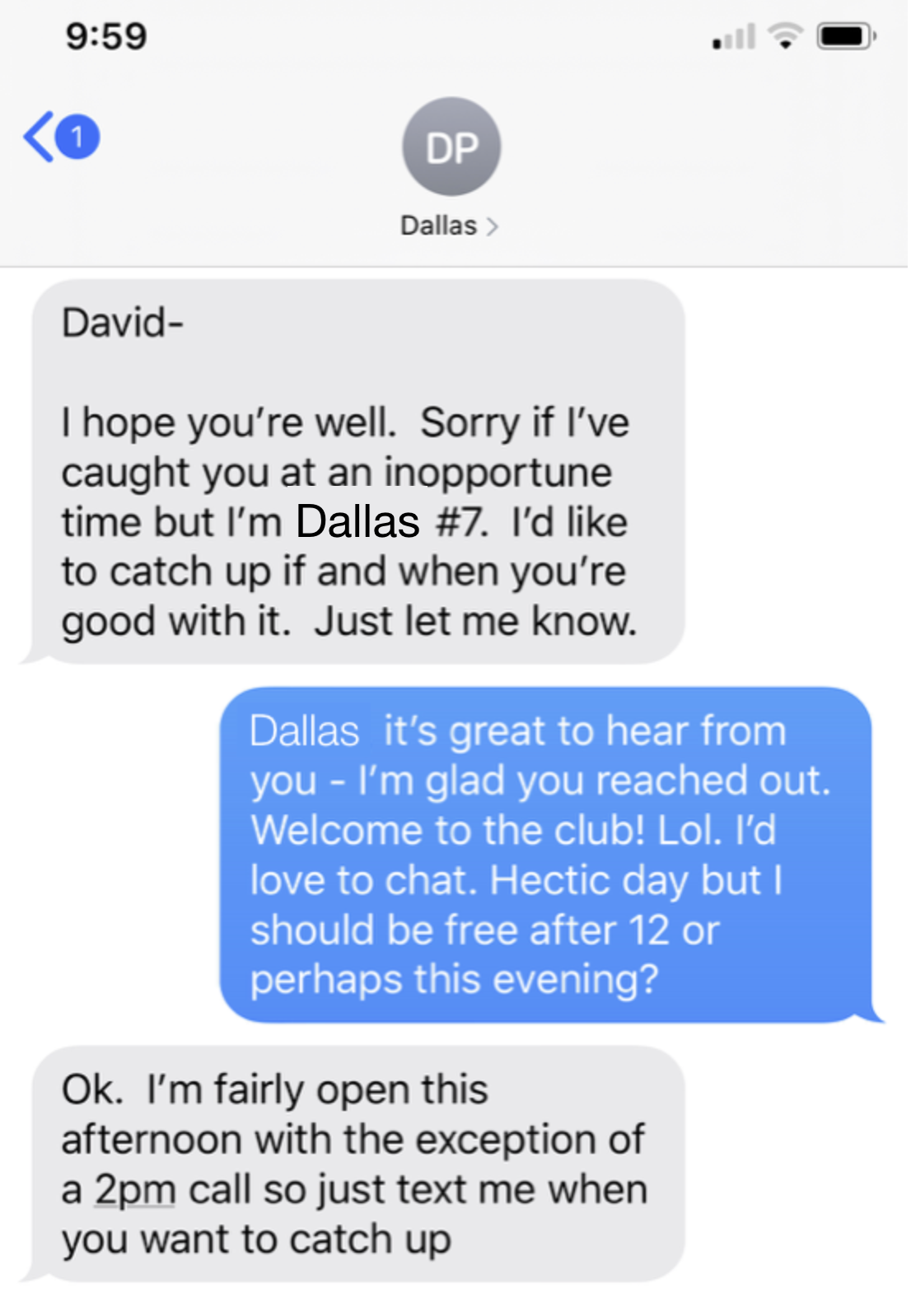 He and I jump on the phone at 2:00 p.m. and immediately have that awkward exchange that new siblings have. It’s like being set-up on a blind date by mutual friends. You both agreed to be there but you have no idea if you want to be there beyond the first meeting.

Or if you’re even able to commit to something like that.

Dallas explains that at a young age, he relocated to Columbus, OH, the son of a single mom, a lesbian who had sought the help of a sperm donor (err, our sperm donor) to add to her family. She already had a daughter from a relationship with a man earlier in her life, Dallas’ older sister. Oddly enough, it’s that man’s last name that Dallas carries as his own — Romano.

A strong Italian name for a Jewish boy.

Prior to Dallas, I’d blindly assumed that kids conceived through donors were somehow more protected from difficult upbringings. Like a mom or dad that wants a child badly enough to seek the help of a donor could somehow smooth the path forward for the rest of their life.

Dallas’ childhood was marked in dramatic fashion in being raised by a single mom with undiagnosed bipolar disorder. And as a direct, albeit not immediate result of her lacking diagnosis, Dallas ended up in the foster care system for a period of his formative years.

On top of that, he has little to no extended family to speak of. But, he’s a single dad himself. He and his wife divorced amicably, and they share custody of their 5-year-old daughter (and weirdly, my second niece).

And most importantly, there’s this: Dallas is actually someone you’re like “phew, okay, it’s cool to be related to someone like this.”

He’s not a dick. He’s warm and engaging. Seems pretty funny. And he’s coming to this all with open arms; he wants in, and he’s not being weird about it.

As it relates to all past, present and future discoveries, I am my own biggest obstacle. Or best friend.

I am one of seven, but I am still just one of me. And I fear who I’ll be on any given day as it relates to all of ‘this.’ All of them. I went through stretches where I was like the newest tween member of the Justin Bieber fan club. I wanted full immersion; all the pain, all the joy, all the details.

But as the numbers have grown and our stories have become layered and nuanced and ever-growing, I’ve found myself unintentionally retreating at times too.

Is it too much for me? I’ve never believed that there’s such a thing as too much. Call me naive, but I’ve navigated life thinking that I am capable of handling whatever is thrown at me. That’s only proven true to the extent that I continue to deal with whatever ‘it’ is. But at times I retreat.

To safety. To myself. I am the only sure thing I know, or think I know, even as permutations of my DNA continue to proliferate the world around me, challenging those same beliefs.

I don’t know if I’m ready for Dallas. But I am open to him. And I know he’s able to read this just as I’ve written it.

The truth is, on any given day, I don’t know what I’m up for.

In fact, just yesterday, he and I spoke for a good 20 minutes on the phone and I loved it. I saw more glimpses into his sense of humor.

And yet, the weight of being someone’s brother — of being the Greater Rochester Area’s brother — is at times too much to truly show up for. As me, or rather, as the best of me.

Who is that fair to but me?

Well, no one. And that’s not easy.